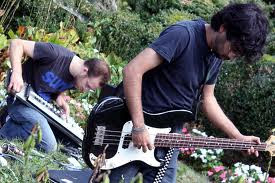 Fairfax, VA's Borborites have become one of my favorites in the DC area improv scene. Mixing elements of jazz, folk and sound artistry, this trio continues to get more impressive with every performance. The homemade cassette tape placed in my hand by a drunken Andrew McCarry at a recent show only further emphasized the fact that these guys are only going to get more impressive. This interview was conducted with Andrew and Chethan.

Borborites were considered to be dirty, nasty characters. So what made you guys decide to name yourselves after them?
Chethan: For a while, we were calling ourselves Borborygmi. We liked the sound of the word and, truthfully, it seemed to be an accurate description of our sound at the time. I think that led to us discovering who the Borborites were via occupational boredom and google-based procrastination. Amidst frequent line-up changes and confusion over what the band's purpose was, we toyed with the need for an alternat
e name. I'm not sure it was even a conscious decision on anybody's part to formally change our name, but I think once the name "Borborites" ended up on concert flyers and uploaded live recordings, we realized that the new name had already stuck. I think "Borborites" is an equally fitting name for us, anyway. All of us involved kind of rightly or wrongly view ourselves as lowlives of some sort. We are dirty, nasty characters, and we may not be particularly proud of that fact, but we at least take solace in accepting it and then using it as an excuse to justify our behavior.

How did you guys get started? Seems like a pretty unique grouping of personalities.

Andrew: It's Chethan and I, and whomever else we've conned into the
ride. We've been good friends for about 10 years and have been making a racket together on and off for most of that time, but we got more "serious" about it after college when we lived together in Fairfax. Various friends and guests have passed through the band. We met Matt over some poppers at a show at record and tape exchange and became close quickly. People with niche interests tend to seek each other out, especially in

You guys have a great sound as a group. There's some folk, psych, rock, and noise tendencies in there. Do you all have any real sort of direction you prefer as a group, or just completely fly off-the-cuff with each performance?

Andrew: We'll have a little idea based on what equipment we brought/is working at each session, but for the most part it's completely free. For now, Matt's staying on drumkit and we're exploring that sound after going for most of our first year completely anchorless. We don't play the same thing twice, and if it sounds too similar it's kind of a disappointment.


You also started Avant Fairfax. What is AF, and what is the goal? Upcoming shows for AF?
The idea for Avant Fairfax came about around November 2008, with the first event happening april 25 2009. Avant Fairfax is a part of the month-long Spotlight on the Arts festival. This is how we get access to the old town hall and the PA we use and about 1/4 of the funding comes in the form of grants from the Commission on the Arts. Joanna Ormesher, the chairwoman of the whole deal is a coworker and close friend.
Anyhow, when Scott Verrastro moved out of DC, we lost the best booker in town. I wanted to have that space, that energy back. Shows at his house 611 Florida or at Warehouse or Velvet Lounge were some of the best nights of music anyone could ask for, truly mind-expansive experiences. (when i was in highschool i essentially thought that the music that came to town was either at 930, black cat or one of the dad-rock venues like birchmere and state theater and that the mythologized days of dc punk underground is way dead.) The bands he plays in, Kohoutek and Kuschty Rye Ergot are my absolute favorite live acts. The guy has fantastic taste, and I work very closely with him to curate the events, as this is something I do a couple times a year, and he does it several times a week.
So with Avant Fairfax, I just wanted there to be something cool to do in this town, (unfortunately, the GMU crowd heavily favors wack shit, but we're working on them) and to bring like a basement show vibe into a historic building, big sound, good beer, and a well curated line-up. It's not like we sell tickets, it's a peer pressure donation system where you pay based on your ability to. Like, I've been to house shows and while it says $5 suggested donation, I'll usually give like 15-20 bucks and bring some beer. It works out often in favor of the artist when it feels like a comfortable hang out and not a money making venture. Sure, I sell beer, but all profit on that goes to the artists. And I sell better beer than is served in fairfax bars and it's cheaper.
The festival is coming up again this year at old town hall, Saturday April 23rd, and we'll have Friday and Sunday shows too. There are some really great bands and solo artists bringing a diverse palate of sound. I am waiting on a headliner's confirmation before I make the big public push for attention. We're also going to be having several benefit shows in advance of the fest, so keep your ear to the ground.

SEVEN1878
Strasburg, Virginia, United States
This is the satellite blog to the experimental label, SEVEN1878. The purpose is to feature artists (interviews and reviews) who are offering creative means of expression to those willing to receive. Artists who don't always get the appropriate appreciation for their craft.